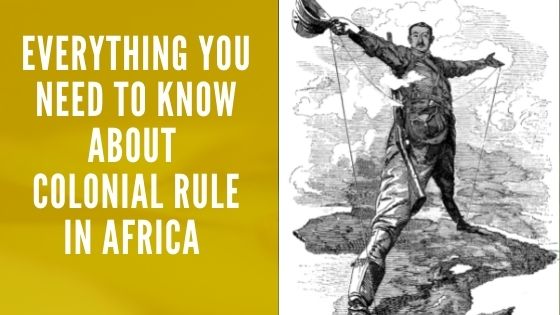 What Is Colonialism & Facts About Colonial Rule in Africa

The term “Colonialism” always represents the process of domination of one country over another.

When considering colonial history, Asia, Africa and Latin American countries are very special. These regions were under colonial rule for many decades in history. Even today, these regions are under neo-colonialism.

As mentioned earlier, Colonialism always represents the process of domination of one country over another.

At the same time many countries faced difficulties to find raw materials for their production and to make a market. Their solution was to find new lands rich in human and land resources.

One of the reasons for colonialism is to spread religion, culture, and language. Most of the countries in Asia, Africa and Latin America were controlled by many colonizers which have different religions, languages and cultures.

As a result of that, many colonies at that time consisted of different cultures, languages and cultures.

Even today, many decolonized countries in Asia, Africa, and Latin America are rich in cultural, religious and ethnic diversities, which is one of the reasons for many internal conflicts.

Colonialism in Africa began in 1800 until the 1960s. With colonial rule, Africa was completely changed.

Before the European control, Africa was very sustained and diversified with producing crops. After the colonization, Africans were shifted into producing single cash crops.

For instance, Gambia was famous for producing rice, but the colonizers changed it into producing peanuts. Similar situation also existed in Sri Lanka, which was sustained in agriculture.

Consequences of the Colonial Rule in Africa

There are many pros and cons of colonial rule in africa. Some are praising the colonization because of the colonial education and the colonial civilization.

However, there are many negative consequences of colonial rule in Africa. Africa is an under- developed country. Most of the colonizers wanted to get the economical benefits from Africans and plunder them rather than introducing industrialization. As a result of that, Africa pulled backwards in the context of development and industrialization.

Another important consequence of colonialism in Africa was the emergence of classes and class struggle. Colonialism supported the emergence and development of classes in Africa. As mentioned earlier, colonizers introduced money and the commercial crops cultivation for Africa. As a result, African society is structured on the basis of money.

Africa was very sustained in agriculture and natural resources. But, with colonization, they were limited only to produce commercial crops for exports.

Africans were not encouraged to produce foods and materials for their domestic usage. As a result of that, the increasing population in Africa faced a food shortage. Even today, Africa always reminds us of hunger and children with malnutrition.

In summary, the current economic, social, political and cultural status of Africa completely depends on the consequences of the colonial plunder in the history they faced.

For further readings, you can check my previous articles on challenges of the African region and the role of the United Nations and Sudan coup in 2019